“Lord, I pray that you use this ministry to change the world!” This was the prayer that was prayed many years ago, and we are seeing it answered in ways that could not have been imagined!

While the Lord has given us influence all over the world, the greatest measure of influence and visible impact that we have been able to have is in the country of Kenya! 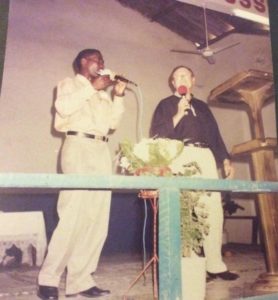 Years ago, Dr. Bennett travelled to Kenya. His translator while there was a young man named Fred Indangasi-Isoyi. You can see Pastor Fred serving as a translator for Dr. B in this picture. Years later, Fred reconnected with Dr. Bennett, and Jesus Power Evangelistic Missions (JPEM–Pastor Fred’s ministry) and Mentoring Men for the Master became began to partner together.

Pastor Fred leads crusades all through Kenya and the surrounding nations
(one such crusade is pictured below). Such crusades are sometimes attended by multiple thousands of people at a time. He sees thousands upon thousands of people make professions each year for Christ, and this is in a culture that has a strong and aggressive Islamic influence (Pastor Fred has received various death threats from the Islamic community as well as assassination attempts). He will then take all these new believers and 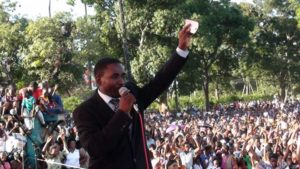 connect them to a local church. If there is no church nearby, then he will plant one. He then has a leadership team that will come in and help the church get off the ground.

To put things in perspective, here are some statistics for the year of 2019. JPEM:

Needless to say, the Lord is using Pastor Fred’s ministry to make an impact!

Additionally, there is a major highway that runs all the way through Kenya. Fred has it in his heart to plant 200 churches along this major highway. It is called the King’s Highway and the churches that Pastor Fred plants share that name: King’s Highway Baptist Church. 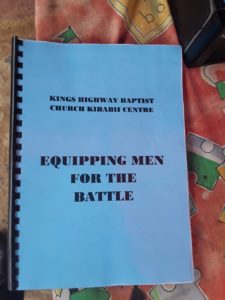 in many of the new churches. The leadership will then use it with the rest of the congregation. We are having EMB/EWB translated into Swahili as well so that those who cannot read English well may still be discipled with the resource! This has led to astronomical impact that has truly spread throughout the entire country of Kenya, and we can’t take an ounce of credit for it. The Lord is the one who has opened the doors and given us the influence and power!

One additional noteworthy item is the number of women’s groups in Kenya. 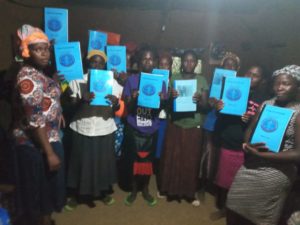 Like the men’s groups, these have grown exponentially. The groups have grown to the point where hundreds and hundreds of people are actively being led through EMB/EWB. The numbers below represent total figures of both men and women. More specifics below!

In 2015 we trained with EMB an initial team of 8 leaders that Pastor Fred selected (pictured here). Since then many of those have taken the resource and used it to disciple countless people! 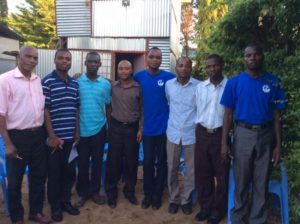 At this time we have influence in at least 34 cities across at least 12 counties in Kenya. In total there are 34 groups actively meeting right now that use EMB/EWB as their discipleship resource. This represents a total of approximately 532 individuals that are currently actively being discipled. This number does not represent any past groups, but only current ones! Because there are so many updates, it will be helpful to break it down into 3 categories: Updates in eastern, central, and western Kenya.

Pastor Nicolas Lusesi is 1 of the 8 men that we discipled pictured above. He 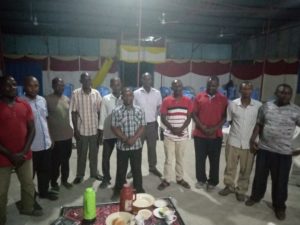 had been pastoring a church is western Kenya for the past couple of years, but Pastor Fred moved him back to Mtwapa, which is close to the major city of Mombasa. Pastor Nicolas is now helping in one of the larger sites of King’s Highway Baptist. One of his primary responsibilities is to disciple church members and leaders both in his church as well as others using the EMB/EWB! He is currently leading 10 groups on a weekly basis ranging in size from one on one to one group that has 23 members! All in all he is discipling roughly 84 people right now. Here is a picture of one of the groups.

Five of these groups are in an area in which we previously have not had any influence. The region is called North Coast. Most of the M3 groups in easter Kenya have been in the southern portion of the coast. Pastor Nicolas and another one of the original 8 members named James Mwambire have been traveling to these 5 towns and discipling the people there. The plan is to pass leadership of these 5 groups off to a man named Pastor Henry Karisa Kalu once he has been trained, because he lives much close to these 5 towns than they do.

Additionally, Nicolas’ wife Edith leads a group of 10 women through EWB. These 10 women are scattered abroad in Kenya, but they meet remotely and do a video training!

Pastors Stephen and Festus are 2 of the 8 leaders that we trained back in 2015. Festus is a pastor of one of the local branches of Kings Highway 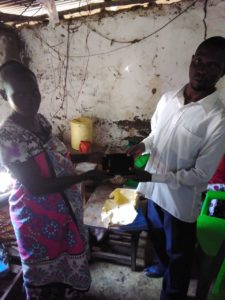 Baptist, and Stephen exercises a regional leadership role within the overarching ministry of JPEM. Here is a picture of Pastor Festus giving a Bible that we funded to one of his church members.

Currently, Pastor Stephen or someone that he has trained is leading 8 groups totaling to be approximately 83 people! These are all in the southern portion of the eastern coast. In fact, we recently attended a graduation ceremony of sorts for some of his group members who had completed the first module in EMB/EWB!

Pastor Stephen Mututu has said, “I just wanted to share my happiness with you for seeing what God is doing in the lives of believers in Pastor Festus’ church. They have grown spiritually since we started M3 classes. They can do what they used not to do, like they can follow the right prayer line which is so encouraging.”

In the middle of the country, we have influence in Nairobi, Kajiado, Machakos, and Kericho Counties in the following towns and cities: Nairobi, Ongata Rongai, Mlolongo, and Kericho. The capital city Nairobi is located near the center of the country.

There is a man and his wife named Jeff and Lily Cherry in Nairobi. Pastor

Jeff is on staff at a church in the city. We led 4 leaders in his church through EMB as well as his wife Lily to EWB. Lily 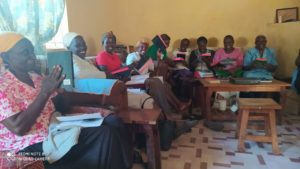 has served as a translator for us when we have led women’s groups in the past. She is currently leading 3 groups of her own with about 23 people between the 3 of them! To the right you will see a picture of her group in the town of Kericho, which is the biggest town in Kericho County. They are all holding up Bibles that we purchased for them!

Peter Mtawali Mbega is also in Nairobi. He is one of the original 8 leaders. He is a 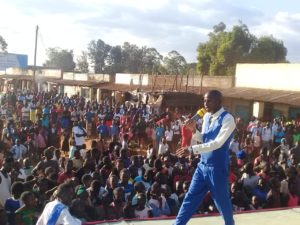 part of Fred Indangasi’s ministry (JPEM) and pastors one of the King’s Highway churches. Here you can see a picture of him speaking at a crusade.

Each week we meet with 7 men who gather in Pastor Mtawali’s church so that they can be discipled by us using EMB. Each of them are in positions of leadership, and it is the goal for them to take what they are learning in the fellowship back to their churches and ministries and disciple the people with whom they have influence!

Three of the guys in this fellowship also have a very impactful opportunity! 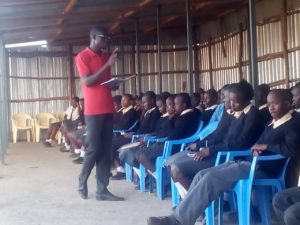 In the local high schools there is a time of the school day in which they can opt to go to either a “Christian Union” (CU) or “Muslim Union”. The CU is similar to what we might call chapel. The three guys are Peter and two others named Tom and Hesbon. There are 13 high 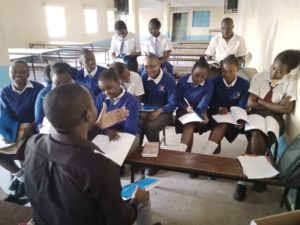 schools that they are planning on going to and using the CU time to disciple the students using EMB/EWB. Before the COVID-19 situation hit, they had already begun doing this. All in all the students number 650! So, needles to say, once the restrictions connected to COVID-19 are lifted, this will be an INCREDIBLE opportunity. 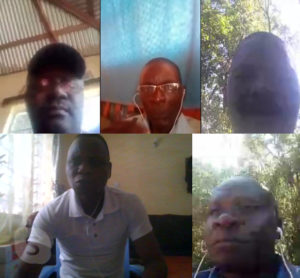 Pastor Nicolas Lusesi leads a group of pastors in Western Kenya through EMB. Nicolas lives on the east coast of Kenya, so they do their meeting remotely. To the right you can see a picture of one such meeting! Many of these guys in this group lead groups of their own! So, as Nicolas equips them they equip others! 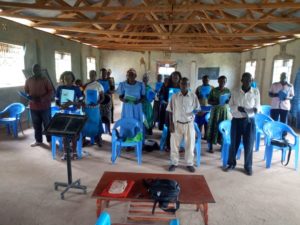 Pastor Geoffrey Barasa is one of the members of this group. He lives in Bungoma and he currently is leading 2 groups. One of the groups has 35 members and the other has 65! Thirty-five of these members are already in the 3rd book in our EMB/EWB series! You can see one of the groups depicted to the left.

Pastor Robert Oda is another member of Pastor Nicolas’ pastors group. He has 2 groups, one with 50 members and the other with 30!

Pastor Sammy Lumbasi is yet another man who attends Pastor Nicolas’ pastors group. He is leading a group of 25 members!

In addition to this, Pastor Nicolas and his wife Edith are leading groups via video chat that live in a very remote place 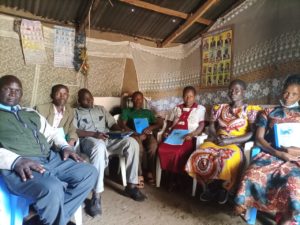 called Mt. Elgon. Nicolas leads 5 pastors from that region through the book and Edith leads 3 of the pastors’ wives through it. To the right you can see these men and women! In Kenya, the title “bishop” is applied to someone who has influence/authority over multiple churches. He is somewhat of a pastor of pastors. In Mt. Elgon Bishop Simon Kwenden is the one who is overseeing a lot of this from his end, and he himself is being discipled through EMB by Pastor Nicolas! The plan is for him to shortly begin leading 2 groups himself, one with 35 members and the other with 40!

Finally, Pastor Nicolas and Edith are discipling a woman named Everlyne Amuguni through EWB. She regularly leaves Kenya and goes to the African country of Malawi. Through this relationship the Lord may very well open a door for us in new parts of Africa in which we have never previously been!

The financial status of many of those in Kenya (especially during COVID-19 with all of the lockdowns) is very tight. They do no have the funds to print copies of EMB/EWB, purchase Bibles, and many other things. This is something that all of those who generously give to M3 have helped support. in 2021 alone we have funded the following YTD:

More is to come with Kenya as it is clear that this is just the tip of the iceberg!