Years ago M3 began with a small group of guys around a round table at a local Cracker Barrel restaurant in Wilmington, NC. Almost 20 years later the ministry has been transformed and expanded all across the US and the world!

Around the world there are dozens (if not hundreds) of M3 groups. Almost all of them use the Equipping Men/Women for the Battle disciple-making resource (EMB/EWB). These are the heart of the ministry on paper. You can read all about this resource HERE. The content for these books comes from our weekly meetings at the original M3 group in Wilmington, NC. 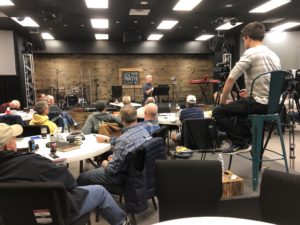 which we have a lesson and a small group time during which we quote the Scripture assignments for that week and share how the Lord spoke to us while we meditated on the passage. Additionally, there are life application assignments that we do throughout the week. On top of this, the small group time is just a time of community and sharing.

Most everything we discuss can fall under 1 of the 10 “I”s, which can be viewed HERE. These items are so foundational to walking with Jesus that in each of the weekly meetings people from all sorts of denominational backgrounds can be found.

Historically, being a part of this main group required that you live in the area and were able to drive to the weekly meetings, but the COVID-19 situation has changed all of that. Since we were unable to meet physically together for a few months, we had to be creative with programs such as Zoom and Skype. This actually served to increase influence and not limit it.

During the months when we were unable to physically meet, we invited our 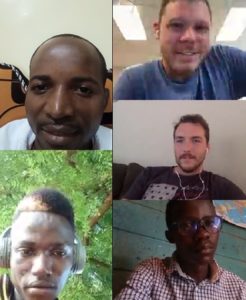 connections from all over the world to begin watching the weekly teachings that were uploaded on the website and then to join one of the small group tables that were happening, since they were taking place remotely anyways. This had a huge turnout. We had people from Kenya, Texas, Pennsylvania, Florida, and elsewhere joining each week.

When we resumed meeting together physically, we desperately did not want to lose the momentum and impact that the Lord had given us with these people abroad. So, we set up live-streaming so that anyone anywhere can watch the message as it is being taught at 7am EST on Saturdays. Then specific leaders have been chosen to facilitate remote small groups. These are groups that are entirely still remote. We currently have about 15-20 people attending remotely each week with that number increasing every meeting. Three specific local leaders have groups that are strictly remote. We are keenly aware that this is setting up for even great impact moving forward!

OTHER M3 GROUPS IN THE USA

We have influence in the following states: NC, SC, GA, FL, AL, TX, VA, PA, MD, MO, DE, OH, MN, CA! Here is a breakdown of what is happening in each state. COVID-19 has obviously temporarily affected some (but certainly not all) of these things.

In addition to our main meeting that happens each week, we have multiple meetings happening in Topsail, Jacksonville, Sharpsburg, Boone, Rocky Mount, Smithfield, and Apex. In these places there are one on one meetings happening as well as small groups, both of which utilize EMB/EWB as their disciple-making resource! 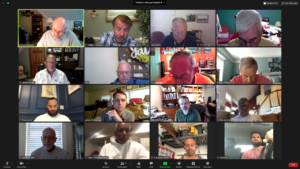 Scott’s Hill Baptist Church in the township of Topsail has an M3 group that meets. The man who is leading the group is Horace Malpass who has been a part of M3 for many years and even served on our Board of Directors! In light of the COVID-19 situation, they also have been doing things remotely, which as opened the door for people from all over to attend. This group currently consists of 15 people from NC, 5 from Maryland, 1 from Missouri, 1 from Delaware, 2 from the Dominican Republic, 1 from Ohio, and 1 from Pennsylvania!

In Jacksonville Robert Williams (pictured here), who is the associate pastor of Tar Landing

Baptist, leads a group using EMB on Wednesdays as well as disciples a man one on one using it! He is also planning to begin discipling another man one on one in the coming months using the resource!

In Sharpsburg, Pastor Todd Greene is currently leading 5 through EMB, 2 of which are longtime deacons. These 2 in particular are being fast-tracked through the resource so that they can begin with others in the church. Pastor Green wants to see discipleship permeate the entire congregation!

In Boone there is a group at Mt. Vernon Church led by Bud Russell (pictured here). Pastor Bud has been leading this group f

or many, many years now! Here is a picture from one of the group meetings!

In Rocky Mount, we led the male pastoral team of Englewood Baptist Church through EMB. They then began groups of their own! At one point, there were 54 separate small groups meeting in the church using EMB/EWB!

Pastor John Scott (pictured here) is another pastor in Rocky Mount. He pastors a church 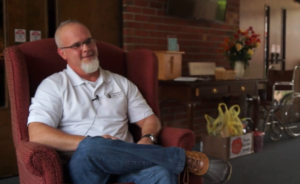 called Parkwood Baptist Church. He was discipled using EMB by the senior pastor at Englewood, Michael Cloer. Pastor John then began utilizing it in his church as well! In fact, his church is about to start a campaign called “Who’s Your One?” that will then segue into a fresh batch of discipleship groups using EMB/EWB!

Pastor Dillon Schupp is the lead pastor of LifeSpring Church in Smithfield, NC. We regularly meet with and disciple him, and he has been leading multiple guys through EMB one on one himself!

In Apex there is a group that meets on Wednesdays that is led by the Chairman of our Board of Directors, Dwayne Fleming!

part of another M3 group in GA, but then had to move. In his new church he gathered a group together that ran for a while and began going through EMB with them! He is about to begin a new group with some guys in the coming weeks!

There are multiple groups taking place in Rome, GA. Mark Huckaby who has been connected to the ministry for many years started multiple groups in GA! Here is a picture of one such group.

One brother who just recently moved down to Tampa, Florida is continuing to attend the weekly meetings via live-streaming and video conference.

pastored for years, and is now connected to M3. We meet with him weekly and lead him through the book. He has begun discipling another person through EMB as well, and is eager to find more opportunities to make disciples!

Doug Chadwick (pictured here) in San Angelo, Texas reached out to us through the website

and we proceeded to lead him through EMB 1.1. The plan is for him to lead his pastor and a team of other leaders in the church through the book and equip them to use it. Then they will each begin their own groups, and then Doug will train another batch of leaders! This will be done until the whole church is able to be discipled!

Travis Goines has been connected to the ministry over the years and has led various group in Virginia that have utilized EMB.

In Pennsylvania we have 2 connections: Micah Russell and John Hodnett (pictured here). Years ago we led Micah through EMB and he actually now attends our weekly meetings in a remote group! John Hodnett was also led through the resource and began a weekly group on Wednesday evenings in which he discipled a group of men using EMB!

Bob Beltran in Brainerd, MN was discipled with EMB by Robert Williams. Robert is one of the pastors at a church in NC, and Bob used to attend his 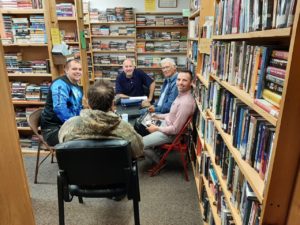 church before moving to Minnesota. He currently leads a group of 5 men through the book on Wednesday mornings, one of whom is his pastor! The pastor each week takes the memory verse for the EMB assignment, and gives it to his whole church as a memory/meditation assignment for that week! So, the entire church is being impacted by this singular group of 4 people! In September, Bob plans on beginning as second group as well!

Jason Post was a faithful member and small group leader of the M3 group in Wilmington, NC. He has since moved to Rocklin, CA where he leads a group through his church that emphasizes many of the biblical principles that we focus on at M3!

We praise the Lord that He has opened so many doors and opportunities for us to partner with Him!